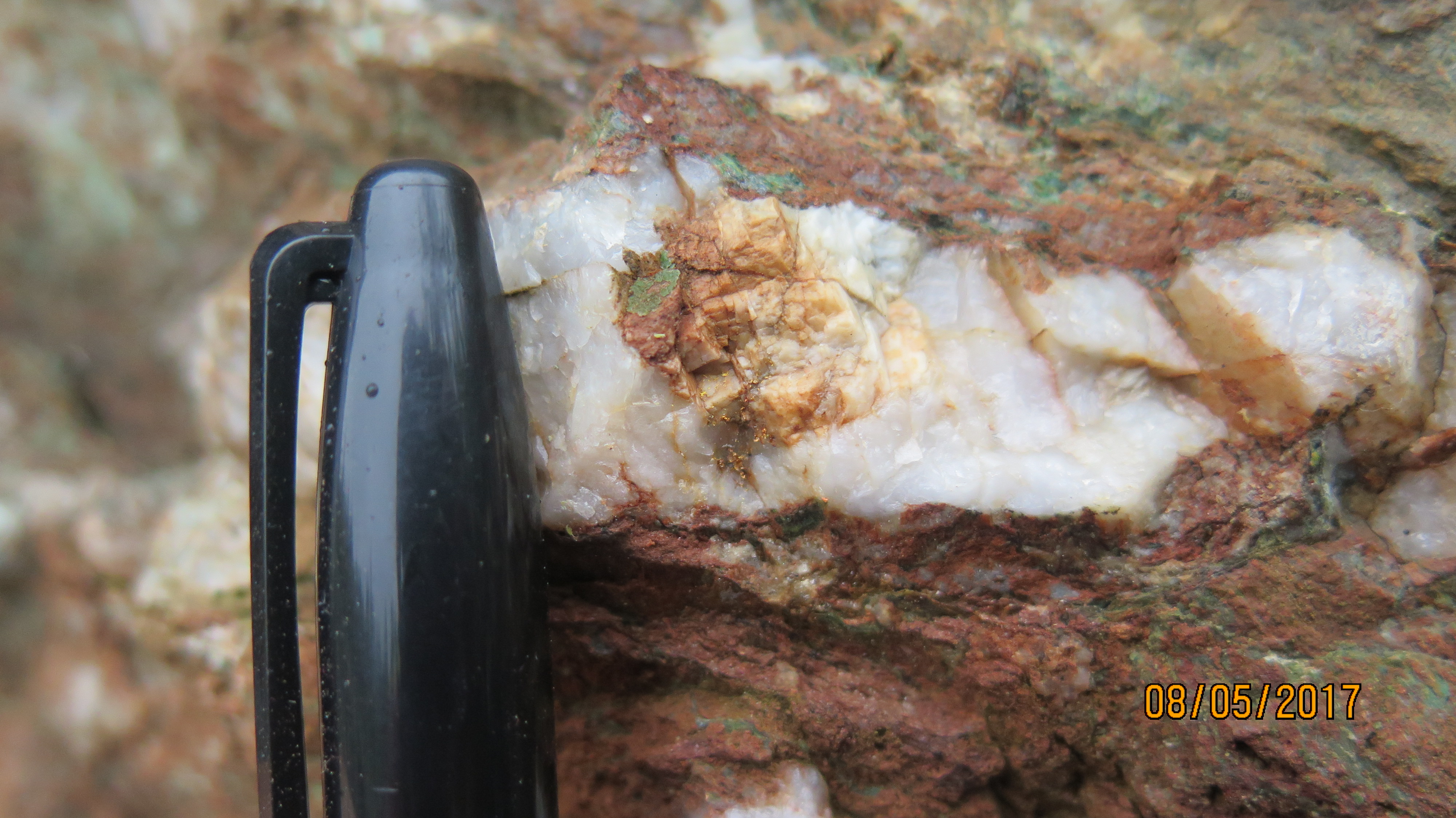 Image caption: Gold mineralization in a quartz vein hosted in fuchsite carbonate altered ultramafic rocks from the Kerr Addison Mine.

The Ben Nevis – Larder Lake transect is approximately 45km in length and is located in the Abitibi subprovince of the Superior Province in northeastern Ontario. This transect is focused on three main areas; the Ben Nevis volcanic complex, part of the Blake River Group, the Timiskaming assemblage and the associated Cadillac- Larder Lake Deformation Zone (CLLDZ), and the Larder Lake Group (Piché Group) and the volcanic and intrusive rocks around the Lincoln Nipissing shear zone in the southern portion of the transect.

At the northern extent of the transect the Archean rocks of the Blake River Group (2701 ± 3 – 2698.5 ± 2Ma) host the Ben Nevis volcanic complex (2696.6 ± 1.3 Ma) (Péloquin et al., 2008). The Blake River Group in Quebec is host to significant VMS deposits of the Noranda camp, however the Ben Nevis volcanic complex, despite its similarities does not host any significant deposits. Metal endowment is one of the fundamental questions addressed under Metal Earth. To approach this, Metal Earth will build upon the existing research to fully characterize the stratigraphy and volcanology of the Ben Nevis area and compare with the Noranda camp to determine processes related to metal endowment.

The Ben Nevis – Larder Lake transect also crosses the Timiskaming assemblage (ca. 2680 – 2670 Ma) (Ayer et al., 2005) with fluvial alluvial- marine sedimentary facies along with syenitic to quartz monzonite intrusions and their trachytic volcanic equivalents. Within the Timiskaming assemblage is a panel of mafic-ultramafic volcanic rocks, considered the Larder Lake Group (ca. 2705) (Corfu et al., 1989) equivalent to the Piché Group in Quebec. The contact between the Larder Lake Group and the Timiskaming assemblage is typically considered the Cadillac – Larder Lake break, a 250 km, east-west trending, regional crustal scale fault, which extends from Matachewan in Ontario to Val d’Or in Quebec and has a fundamental control on the distribution of gold deposits. The area of this transect is associated with significant gold mines along the break including the Kerr-Addison deposit and the smaller deposits such as McGarry, Bear Lake, Cheminis, Fernland and Omega.

The Metal Earth project aims to characterize the original relationship between the Larder Lake Group and the Timiskaming assemblage to determine if there was an original sedimentary (unconformable) relationship or if it is solely a structural relationship. The project also aims to understand the volcanic stratigraphy of the Larder Lake Group and the association of the stratigraphy and structural geology to gold mineralization along the break.

In the southern part of the transect, the Lincoln Nipissing shear zone (LNSZ) is poorly documented partly due to its lack of exposure. The objective of the Metal Earth project is to characterize the fault zone with the associated intrusion related gold prospects.

Several research contributions will be available to the public including the entire transect map and cross section, which integrates stratigraphic and structural data as well as seismic, magnetotelluric, gravity and aeromagnetic data. All these Metal Earth data will be integrated into a common platform and made available to the public. Research articles originating from major scientific topics will be published in peer-reviewed journals. One thematic Ph.D., project, three M.Sc. theses and an undergraduate B.Sc. Hons thesis will be completed associated with the Ben-Nevis Larder Lake transect.