Earths Source for Minerals - The Mantle

Minerals in economic concentrations are found in earths crust. Ultimately, the source of all these minerals that end up in the crust, came from the mantle. Surprisingly, even though the mantle is that main source, there is very little that is known about the distribution of key metals. In particular, the location, spatial distribution and mechanism of transfer of gold from the mantle into the earths crust.

The Mantle Group investigates the relationships between the earths crust and the mantle to contribute to project Metal Earth’s efforts. They are focused around mapping and characterizing the shallowest portion of earths crust to try and establish the link between all that data and the underlining deep seeded processes that took place to facilitate the mineralization process.

Ultimately, all metal enrichment in Earth’s crust derives directly, or indirectly, from the mantle. Given this, it is surprising that there is very little information on how, and on what timescale, the lithospheric mantle underpinning continents stores metals for later enrichment in the crust, or whether it merely acts as a pathway for metal transfer straight from the convecting part of the mantle. Considering all the work that has been performed historically on understanding gold mineralization, the study of where gold sits in Earth’s mantle and how it gets into the crust in economically viable proportions is still in its infancy.

We aim to change that.

The second driver for the mantle group is examining the mechanisms of crust extraction from the mantle through time and how that has affected metal endowment and localization in cratons – specifically the Superior craton. Curiously, metal endowment is almost totally absent in Earth’s oldest crust – formed in the Hadean and Eoarchean (4.55 to 3.6 Ga). In contrast the majority of Earth’s gold is extracted from rocks of Paleo to Neoarchean age (3.6 to 2.5 Ga).

A key question is: What drove this transition? Was it related to the mechanism of crust formation or the protection of the crust by continental mantle roots?

1) To evaluate the role of the lithospheric mantle in controlling metal endowment in cratons, with a view to using this information to find new mineral deposits.

These two objectives should illustrate the importance of crust-mantle interaction in creating world class mineral deposits.

Contributing to a Modern Technological Society

“Everybody that is interested in exploration, anywhere on earth, will benefit from new information that is generated by this project. Whether or not you’re a small junior company doing grassroots exploration or a major multi national company looking for tier 1 world class deposits, the information is relevant across the board to all types of mineral deposits."

"It’s extremely important for Canada as a whole because we are an economy built on resources and these resources are finite. In a modern technological society where everybody uses a huge variety of metals in their everyday lives, we need to keep finding more.”

From the economic perspective, we are providing fundamental information on the role of the lithospheric mantle in creating and preserving mineral deposits. This information can be fed directly back into exploration models for new deposits. In addition, understanding the control of crust formation mechanisms on metal endowment may provide an over-arching model of how to target crustal rocks of specific composition for metal exploration.

One major output so far is that post-doc Adrien Vezinet has produced the first detailed tracer isotopic and geochronological study of the Eoarchean Saglek block in Labrador, which will be used as a benchmark to compare how the oldest parts of the Superior craton crust formed. This was published in the high impact factor journal Earth & Planetary Science Letters. This study also found the earliest evidence for the interaction of the hydrosphere with the Earth’s crust in a solid rock. The importance of this is that fluid-rock interaction is perhaps the key process in driving metal enrichment.

Our studies of the Kirkland Lake mantle xenolith suite have revealed that the mantle lithosphere root beneath this part of the Superior craton formed in the Neoarchean, possibly after the formation of the greenstone belts. We are looking at how the complex precious metal characteristics of these rocks tell us about how gold and other metals might have been transferred from mantle to crust at this time.

Working with a network of world class scientists

"Having the latitude in our group to explore some of the more fundamental questions about what the mechanisms are of metal transport in the context of a much larger project where other people are getting complementary data is a rare opportunity."

"We’re able to work with a network of scientists with world class reputations to solve an important problem and make a contribution to finding new ore deposits.” 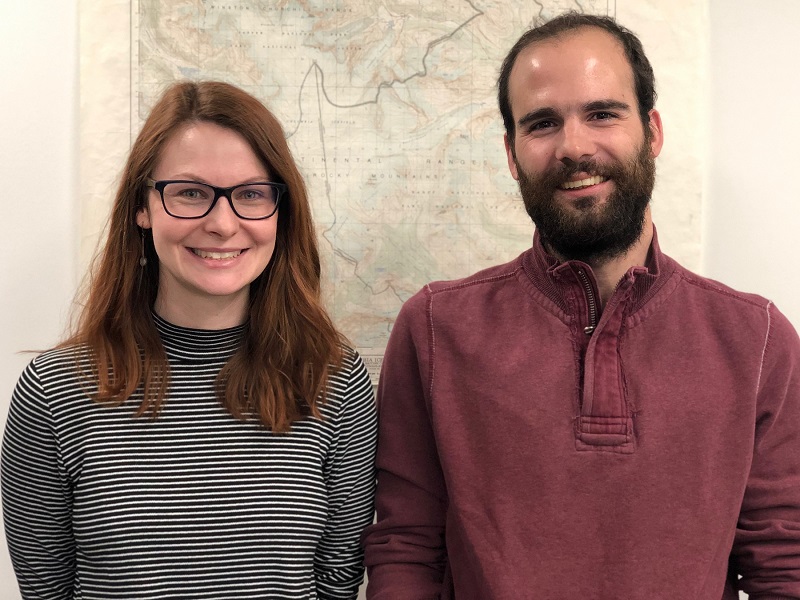 Image Above: Metal Earth Postdocs in the Mantle Group at the University of Alberta: Drs. Adrien Vezinet and Janina Czas.