The project updates are as follows:

Localization and Genesis of Cr and Ni-Cu-PGE Mineralization in the “Ring of Fire” District, Ontario

[Lesher/Houlé/Weston/Jugo]: This soon-to-be-completed project has been a comprehensive examination of the geology, stratigraphy, mineralogy, geochemistry, and petrogenesis of the Black Thor Intrusion and Eagle’s Nest dike. Spath completed his thesis on the Black Label Breccia Zone and a journal paper is in preparation. Farhangi defended her thesis on Ni-Cu-PGE mineralization in the Black Thor Intrusion last fall and is finalizing a paper for publication. Zuccarelli recently defended her thesis on the textures, geochemistry, and genesis of Ni-Cu-PGE mineralization in the Eagle’s Nest dike, and is finalizing a journal paper. Carson is in the final stages of completion of her thesis and three journal papers on the stratigraphy, mineralogy, geochemistry, petrology, and genesis of the Black Thor Intrusion, which hosts the world-class Black Thor chromite deposit. A large number of Open-File reports and meeting presentations have been given over the past several years, including the 35th International Geological Congress in Capetown and the 13th International Ni-Cu-PGE Symposium in Perth. A paper describing a new model for chromite deposits of this type was published in 2019 in Geology https://doi.org/10.1130/G45448.1. Houlé, Weston, and Lesher are planning a special journal issue on the geology and ore deposits of the Ring of Fire district that will include all of the LU – GSC/TGI – Cliffs/Noront research in the Ring of Fire. 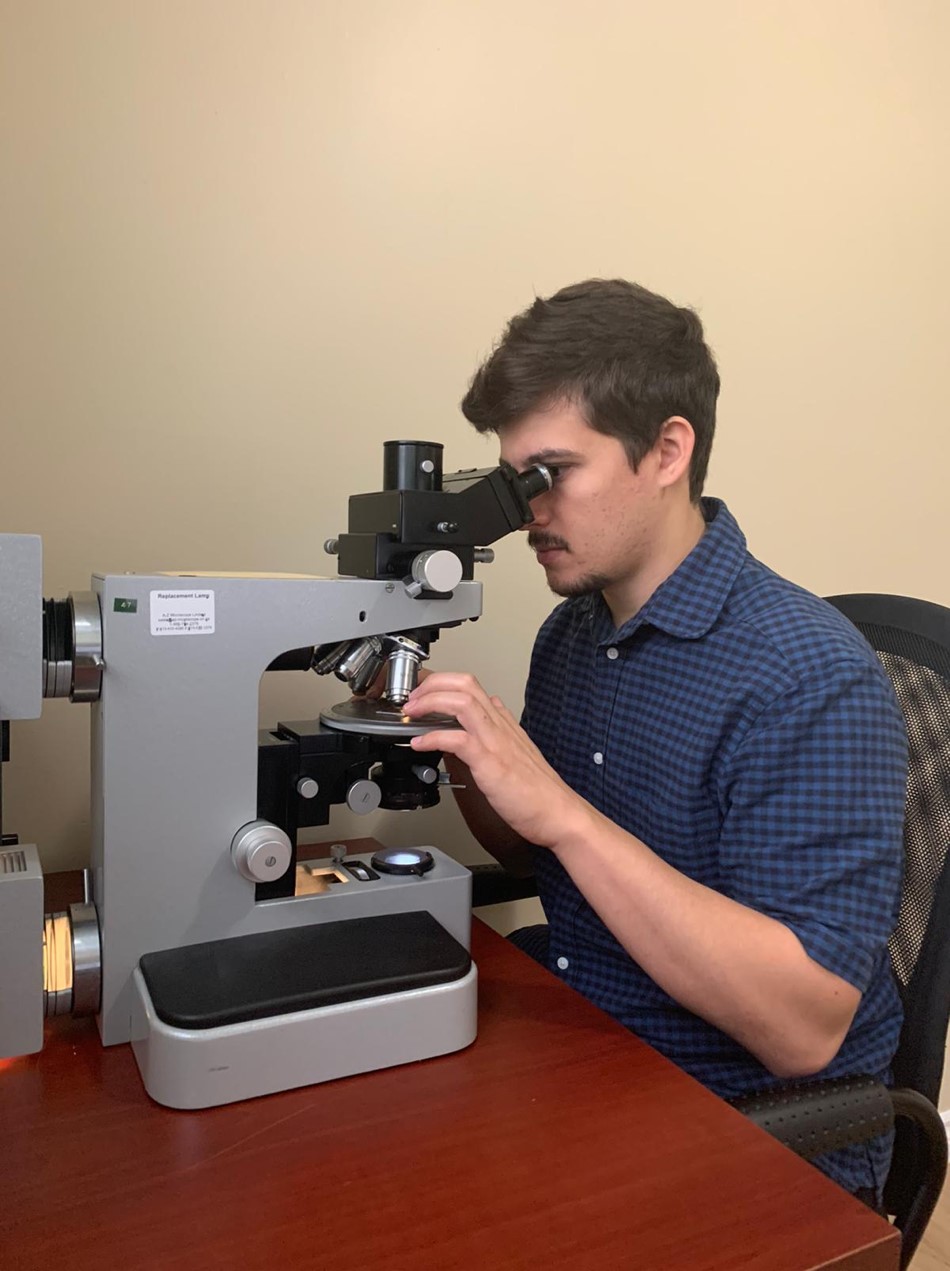 [Lesher/Houlé/Jugo/Weston]: This project aims to determine why some komatiitic systems form only Ni-Cu-PGE deposits, some produce only Cr deposits, and why some produce both. PhD student Klaus Kuster is focussing on 1) building databases the geochemistry and volcanic facies of komatiites and the facies of iron-formations in the entire Superior Province in order better understand the metallogenic controls on their formation, 2) pre-field compilation work at Shebandowan ON and Lac des Montagnes QC, and 3) thermodynamic modelling of chromite solubility in mafic-ultramafic magmas. The objectives of the project were presented at the 2020 PDAC meeting in Toronto. This project is being supported by Metal Earth and the GSC/TGI, and facilitated by Ministère d’Énergie et Ressources naturelles du Québec and Noront Resources.

Photo by B. Kuster: Klaus Kuster studying thin sections from the Shebandowan area.

Localization and Genesis of Ni-Cu-PGE Mineralization in the Cape Smith Belt, Quebec, Canada 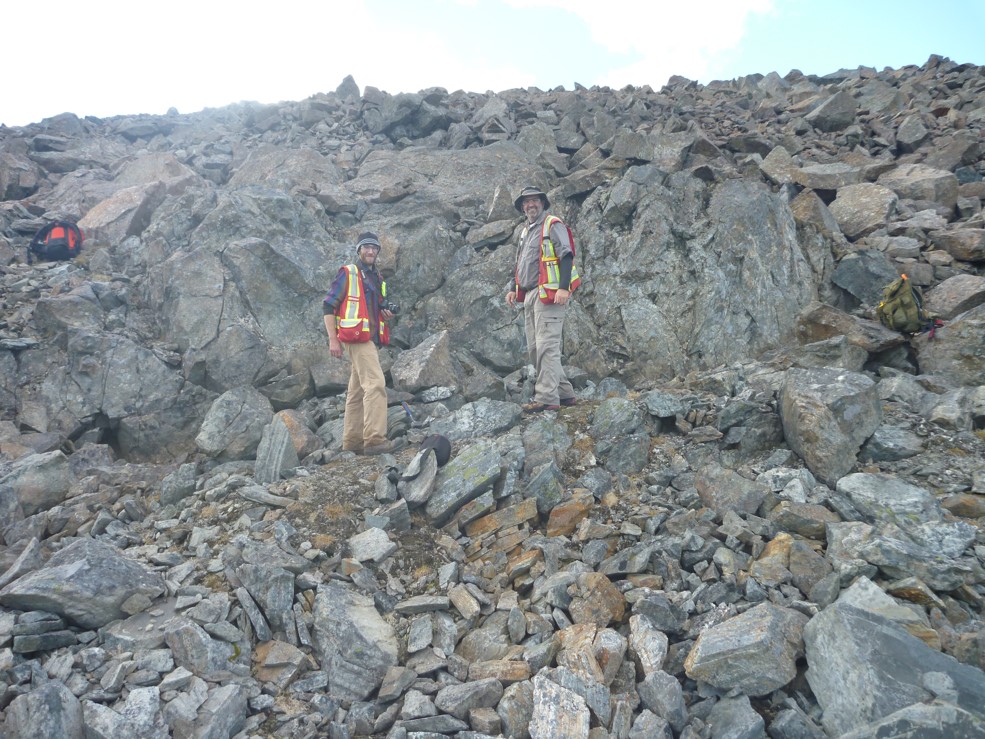 [Lesher/Houlé/Jugo]: The aim of this project is to establish the petrogenesis of mafic-ultramafic volcanic and subvolcanic rocks in the belt, and the architectural and petrogenetic relationships between the Ni-Cu-PGE mineralization in the subvolcanic Expo-Méquillon and volcanic/invasive Raglan parts of the system. PhD student Dylan McKevitt has completed 3 seasons of fieldwork and a major compilation of new and legacy geochemical data. He is presently writing his thesis and three journal papers. Preliminary results have been presented at the 2017 and 2019 Québec Mines meetings, at the 2018 GSA meeting in Indianapolis, and in 2018, 2019, and 2020 GSC Open-File Reports. This work has been supported by NSERC and the GSC/TGI, and facilitated by Glencore and Canadian Royalties. 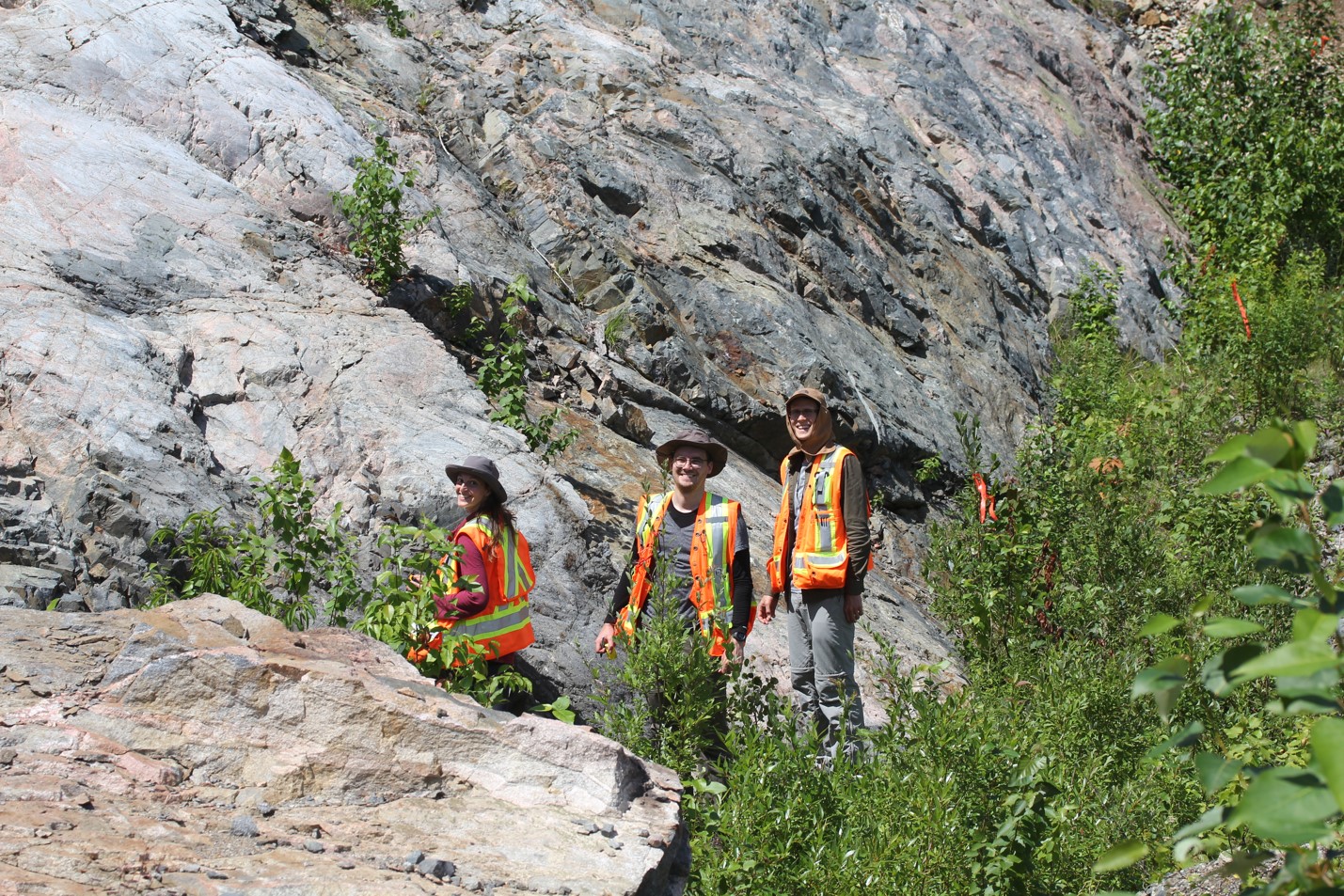 [Lesher/Pattison/Jørgensen/Jugo/Tinkham]: This project started in summer 2019 and is a follow-up to work by Jørgensen on contact metamorphism in the South Range (doi.org/10.1130/G39590.1; doi.org/10.1111/jmg.12460; in revision) and by Wang on the petrogenesis of mafic-ultramafic inclusions in Sublayer (doi.org/10.1130/G39913.1; doi.org/10.1093/petrology/egaa059; in prep). It is focussing on 1) the relationships between mineralized Sublayer, autocthonous and allocthonous anatectic breccias, and inclusion quartz diorite, and 2) the chemostratigraphy and mass balances in the Main Mass of the SIC and its ability to provide S and metals, and to explain observed S-Pb-Os isotopic variations in the ores and Nd-Hf isotopic variations in the Main Mass. Peters is working on the North Range, currently logging/sampling drill cores/outcrops and compiling/QAQC/leveling of existing high-quality geochemical traverses. Baurier-Aymat is working on the South Range, currently focussing on mineralized breccias in the Cryderman area and on fill-in sampling of representative geochemical traverses. Seibel is working on the emplacement of offset dikes and the formation of associated Ni-Cu-PGE mineralization, focussing on contact relationships between offset dike lithologies, other impact-related rocks, and country rocks. All three have presented initial ideas and plans at the PDAC 2020 meeting in Toronto and at the recent 14th International Ni-Cu-PGE Symposium (magsul.laurentian.ca). Silva is in the process of writing up his Applied MSc project on sulfide fractionation in the Copper Cliff offset. This work is being supported by NSERC and Metal Earth, supported and facilitated by Vale, and facilitated by Glencore, Inventus Mining, KGHM, and Wallbridge Mining.

Constraints on PGE-Ni-Cu mineralization in the Platreef (northern limb of the Bushveld Igneous Complex, South Africa) and implications for mineral exploration 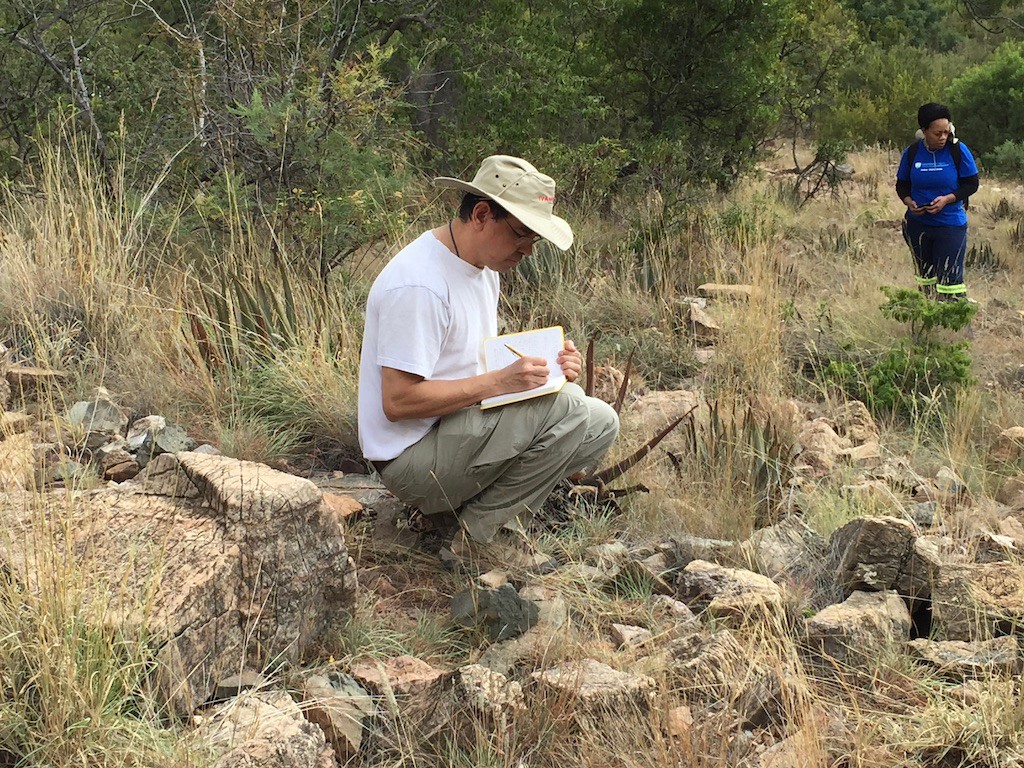 [Jugo/Leybourne/Grobler/Lesher]: This project aims to determine the processes that controlled the spatial distribution and variations in the thickness of PGE-Ni-Cu mineralization in Ivanplats’ world-class Flatreef deposit. The goal is to develop tools and protocols that could be valuable in the exploration for PGE-Ni-Cu deposits worldwide. Results over the last two years include: three completed MSc theses (Mayer, Keir-Sage, Mkhonto) and corresponding peer-reviewed articles (Sr-isotope stratigraphic markers: doi: 10.1007/s00126-020-01006-3; S/Se, S and other trace element parameters to map the extent of crustal contamination: in press; sulfide mineral chemistry to recognize different mineralization processes: in prep), as well as three articles by Langa on the first comprehensive characterization of a massive chromitite seam in the northern limb (the UG-2E), one published (demonstrating that the UG-2E is correlative to the UG-2: doi: 10.1007/s00126-020-00964-y) and two in advanced stages of preparation (on the origin of chromitite seams and of the sulfide, PGE, and PGM characteristics of the UG-2E). The results have been presented at several conferences including the 13th International Pt Symposium (Mokopane SA), the 15th Biennial SGA Meeting (Glasgow), and annual GAC-MAC meetings and PDAC-SEG Student Minerals Colloquia. So far, the results confirm that the Flatreef stratigraphy and PGE-Ni-Cu mineralization is a lot more similar to the well-known Merensky and UG-2 reefs than previously recognized or acknowledged. The three published or in press articles mentioned above are part of an upcoming Special Volume on the Flatreef soon to be published in Mineralium Deposita, and co-edited by Jugo. On-going work by Mapeka aims to determine why the Flatreef is much thicker than the Merensky Reef and what causes the local variation in the thickness of PGE-Ni-Cu mineralization. This project is supported by NSERC, Ivanplats, and scholarships from the Queen Elizabeth II Diamond Jubilee Scholarships (QES) program and the International Development Research Centre (IDRC). Mkhonto is now in the PhD program at Queen’s, supervised by Leybourne and Jugo, with a focus on mass independent S, Se, and Te isotopes in the northern limb of the Bushveld Igneous Complex. She is also working on olivine and galena as Dark Matter Paleodetectors in collaboration with the Arthur B. McDonald Canadian Astroparticle Physics Research Institute.

Photo by M. Leybourne: Pedro Jugo and Thabiso Makhohliso in the field on the Northern Limb of the Bushveld Complex. 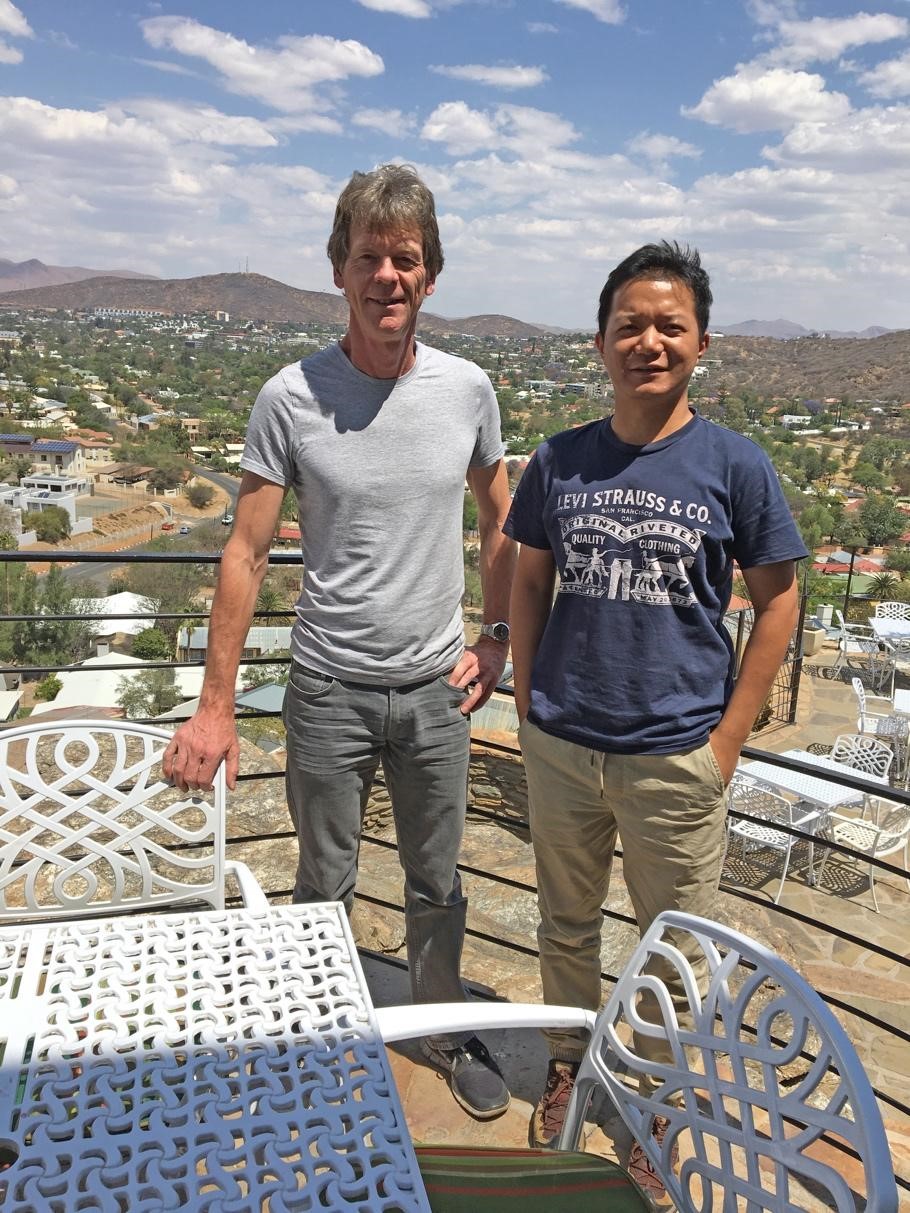 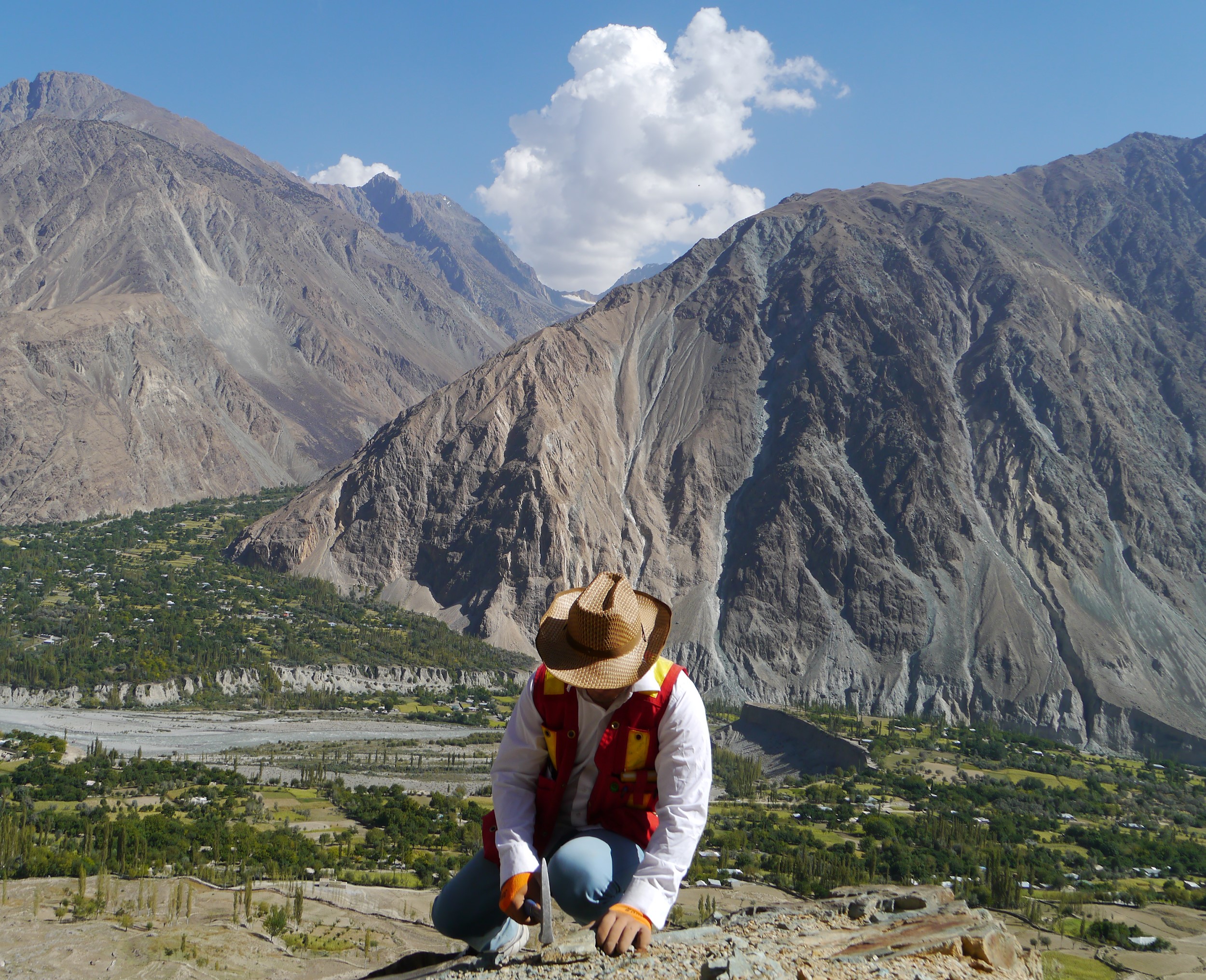 [Jugo/Tinkham/Kontak/Sherlock/Lesher]. This project was initiated by the late Prof Jeremy Richards (1960-2019) and aims to understand the magmatic roots of porphyry deposits. Ahmad is characterizing a well-exposed arc-related lower crust section (the Kohistan arc, northern Pakistan) to constrain how the behaviour of Au, Cu, and PGE would be affected by sulfide saturation in the lower crust. Meng is characterizing rock suites from the Precambrian porphyry deposits (Tongkuangyu, China; Haib, Namibia; and in the Abitibi greenstone belt, Canada) to determine similarities and differences in petrogenetic conditions in the Precambrian versus the Phanerozoic. This work is supported by Metal Earth, NSERC, the Harquail School of Earth Sciences, and a scholarship to Meng from the China Scholarship Council.